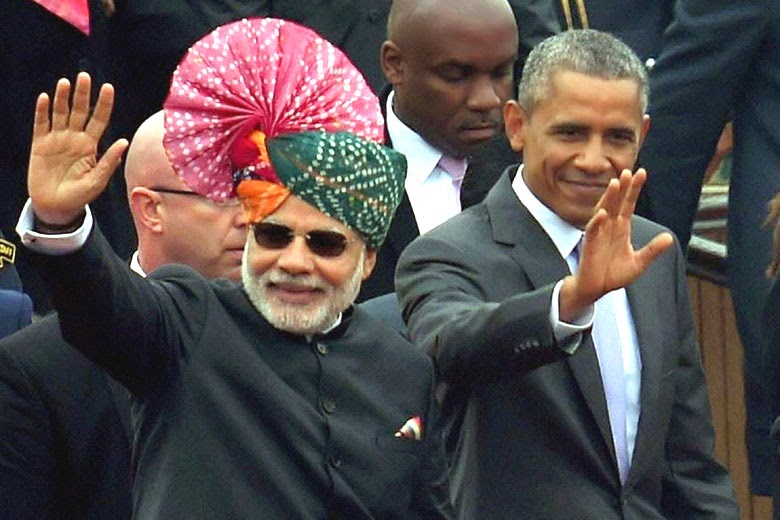 For Time Magazine, The profile, titled "India's reformer-in-chief", is part of the publication's list of the 100 most influential people in the world. After coming to power last year, Mr Modi promised to start the reforms process to take India to "new heights of economic development".
Mr Obama admires the rise of Mr Modi from a tea-seller to India's prime minister in the profile. Mr Modi had spoken about his humble roots during his election campaigning last year.
"As a boy, Narendra Modi helped his father sell tea to support their family. Today, he is the leader of the world's largest democracy, and his life story - from poverty to Prime Minister - reflects the dynamism and potential of India's rise,
The News papersays "Mr Obama has described Mr Modi's life story 'from poverty to prime minister' as one that reflects the dynamism and potential of India's rise".
Mr Modi, meanwhile, thanked the US president for his kind words. "Dear @BarackObama your words are touching & inspiring. Thanks," the paper quotes Mr Modi's Tweet.
The US president and the Indian prime minister have developed bonhomie in recent months with both leaders visiting each other's countries. Mr Modi visited the US in September last year and Mr Obama was present as the chief guest during India's Republic Day celebrations in January this year.
But his ties with the US and its leaders have not always been smooth. The US repeatedly denied him visas when he was the chief minister of the western state of Gujarat due to his controversial role in the riots in the state in 2002.
read more.........