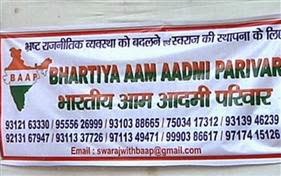 The report, quoting BJP sources, said the party was targeting seats where it narrowly lost to the AAP by in the last Assembly polls held in December last year.

In the report, BAAP chief confirmed that he had held talks with BJP
Neeraj Kumar said a decision on fielding candidates in the Assembly polls had been taken.

BAAP candidates would contest as independents on many seats as possible Neeraj Kumar was quoted as saying.

BAAP reportedly comprises of many former members of India Against Corruption group.