Delhi is Going to be World Class City... BJP Promisses!! 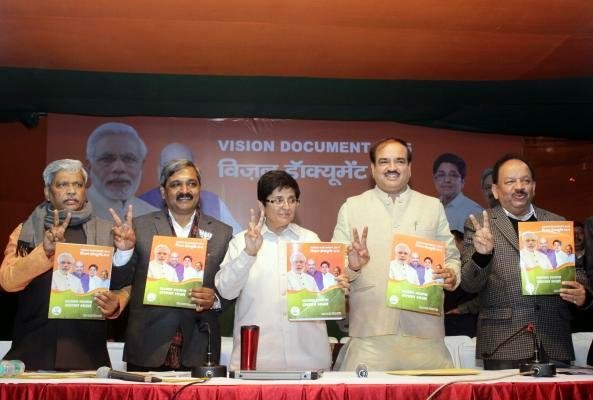 Ahead of the Delhi assembly polls, BJP on Tuesday released a “Vision Document” laying down a road-map to make the national capital a world class city with major focus on development and women security besides promising transparency in governance. The document did not spell out BJP’s position on full statehood to the national capital which it had promised in its manifestos for the 2013 assembly polls and past elections.
Vision Document or BJP manifesto?
Vision Document can be called as BJP manifesto, promises to address shortage of water, ensure round-the-clock power supply, proving houses to slum dwellers and making the administration responsive and people-friendly.
As per senior leaders told to media “We will make Delhi a world-class city. We will ensure development of all sections. Women security will be a priority area for us,”Kiran Bedi, Senior leaders Nirmala Sitharaman, Ananth Kumar, Harsh Vardhan, party’s Delhi unit Chief Satish Upadhyay were present on the occasion.
Followings are the Important Points in Vision Document!!
No Cut in Power Tarrif !!
1.The saffron party also did not make any specific mention about cutting power tariff which was a major promise by it ahead of assembly polls in 2013. However, the document said BPL and poor families will be provided power at subsidised rate. In 2013 manifesto, BJP had promised to cut tariff by 30 per cent if it comes to power.
2.In the vision document, the party promised to scrap the controversial Bus Rapid Corridor in South Delhi.
3. As per vision document said BJP government will make compulsory health insurance for all citizens of Delhi.
4. The party said that 15-bed hospitals and ambulances with paramedical staff will be made available at every 5-km in the national capital if it comes to power.
5. Promised to introduce private OPD facilities by government specialists in all government hospitals from 5 pm to 7 pm in the evenings.
6. The party has also focused on the protection of people belonging to Northeastern states in its Vision Document with a Special Cell to be set up in all police stations along with a special 24-hour helpline.
7. BJP also said that if it comes to power, regularisation and development of unauthorised colonies will be done and all facilities, similar to those provided by DDA colonies, will be provided.
8. BJP said that water rates will be rationalised and water bills will also be reviewed. Besides, water will be brought from Munak Canal in cooperation with Haryana government.
9. Clean, potable water will be made available to every home in the national capital. Rainwater harvesting will be encouraged and government will provide aid for the same.


10.To cap wastage of water, the basic structure of the water supply chain will be modernised and check dams will be built on Yamuna River.
read more ..........
Posted by Unknown at 06:26