Me & My Government has Only one Religion India First......read

Prime Minister Narendra Modi in Parliament said "My Govt. has Only one Religion India First" 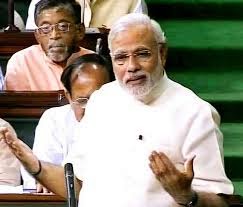 Prime Minister clear in Parliament:---
“My government’s only religion is ‘India first’, my government’s only religious book is ‘Indian Constitution’, our only devotion is ‘Bharat Bhakti’ and our only prayer is ‘welfare of all’,Nobody has the right to discriminate on the basis of religion...No one has the right to take law into his hands,” the Prime Minister said in Lok Sabha while replying to a debate on the President’s Address.

He declared that as the Prime Minister, it was his “responsibility” not to allow ridiculous comments in the name of religion.

His statement assumes significance as the government has been under attack over certain communal remarks made by some BJP and Sangh Parivar leaders.

Insisting that “we want all religions to prosper”, the Prime Minister said it was possible only in India under its Constitution which has been prepared with the thinking flowing from thousands of years of the country’s history.

“This nation full of diversity. We are for unity in diversity, not disunity. All religions should flourish. It is the uniqueness of India because of its Constitution,” he said.
“We want to take the nation forward within the framework of the Constitution,” Mr. Modi said, adding he saw only the “tricolor” and “no other colour.”


Referring to his slogan of ‘sabka saath, sabka vikas’, he said he sought the cooperation of the opposition also for the benefit of the country.