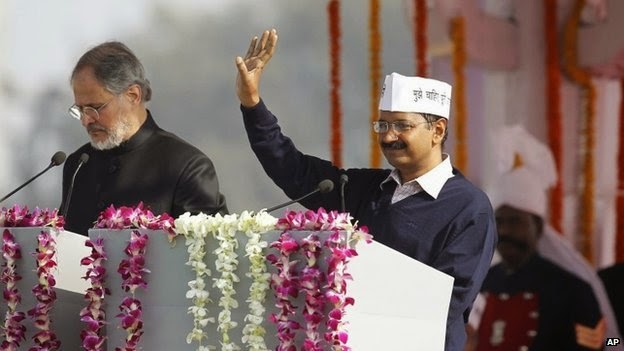 Kejriwal addressed made to the the gathering contain Following Points...

Staring his address with ‘Bharat Mata ki Jai’ Kejriwal said, Terming the verdict as 'miracle of God', "I knew people of Delhi love me, but didn't know they love me so much."

The AAP had won 67 of the 70 seats in Delhi decimating the Congress and leaving only three seats for the BJP. 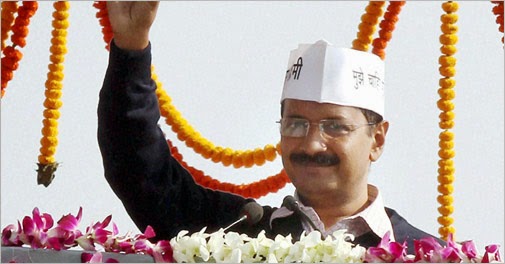 Assuring people that his government will make Delhi "India's first corruption-free state", he said if somebody asks for bribe don't refuse 'setting kar lena' (fix the deal) and video record it. Send the video footage to me. I will take action."

Reacting to recent attacks on churches and a Christian school on Friday in Delhi, he said, "In recent days, we witnessed several communal incidents in Delhi. We witnessed burning of churches. I want to warn the elements who are responsible for these incidents."
"I want to make Delhi a place where people of all religions feel safe," says Kejriwal, asserting that people of all religions, castes and classes voted for the AAP.
Emphasising that he wants cooperation and good relations with the Centre, Kejriwal said BJP had promised to grant full statehood to Delhi.
"Before the elections, they had promised this to the people of Delhi. It's not possible for the Centre to take care of important issues related with governance of the state, so I hope the Centre will fulfil their promise," the chief minister said.
Cautioning his party, he said, "I can see arrogance in reports that the AAP will fight elections in other states...We have to make sure that we don't get carried away and become arrogant."
Asserting that his government will not spare anyone, he said, "Some people might try to malign us by impersonating as AAP workers. I want to tell the law and order machinery not to spare anyone who indulges in unlawful activities."
During his address, Kejriwal also mentioned his opponents in the Delhi polls -- BJP's Kiran Bedi and Congress' Ajay Maken. "I respect Kiran Bedi, she is like my elder sister. She has good experience in administration, I need her advice. I will cooperate with Ajay Maken too. I will involve everyone to make Delhi an ideal state," the chief minister said.