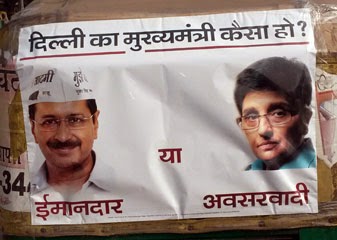 BJP's chief ministerial nominee Kiran Bedi on Tuesday sent a legal notice to AAP leader Arvind Kejriwal for using her photograph in the party's poster campaign without her permission.
She sent a notice to Kejriwal. Kejriwal has been asked to ensure that the posters are removed," BJP’s media convener Praveen Shankar Kapoor told Media.
The Aam Aadmi Party (AAP) has recently put up posters on numerous auto-rickshaws plying in the national capital, asking the people of Delhi to choose between Mr. Kejriwal and Ms. Bedi for the post of chief minister.
In the posters, the picture of Mr. Kejriwal has the word "imandar" (honest) printed below it while that of Mr. Bedi has "avsarvadi" (opportunist). 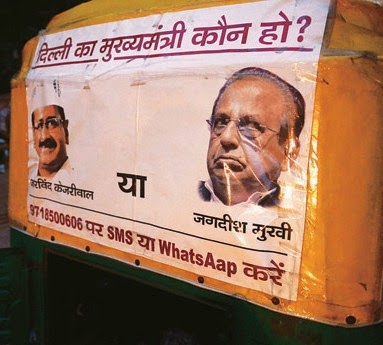 Earlier, party leader Jagdish Mukhi, too, had sent a notice to Mr. Kejriwal for using his photograph in similar posters, before the BJP declared Ms. Bedi as their chief ministerial candidate.
Read More.......
Posted by Unknown at 05:55